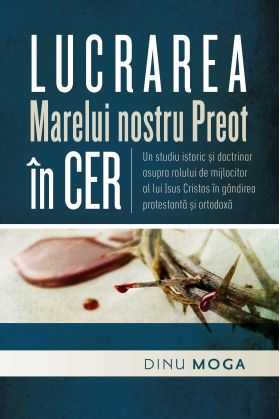 These facts raise questions regarding the fundamental presuppositions on which orthodox and protestant soteriology is based.

The aim of this study is to clarify the theological differences between the protestant and orthodox tradition and the practical implications in the area of evangelism and Christian living.  More precisely, our aim is to see the way in which this presentation affects the preaching of the biblical message regarding the uniqueness and exclusiveness of Christ in salvation, in general, and His mediation in heaven in particular in an orthodox religious context.

Dinu MOGA was born in 1963 in Oradea - Romania. In 1992 he graduated from London Theological Seminary and then earned his BA degree in biblical studies from Trinity College of the Bible, IN, USA, and a BA degree in pastoral theology from Emanuel University of Oradea, Romania. In 2005 he earned his Th. M. from Westminster Theological Seminary, Philadelphia, USA through the John Owen Centre in London, and in 2015 he completed his doctoral studies with the Faculty of Reformed Theology of Babes-Bolyai University in Cluj-Napoca, Romania.

Between 1996 - 2013 he coordinated the studies of the School of the Prophets in Emanuel Baptist Church in Oradea and in 1996 he founded Făclia Publishing House, located in the same town in Romania. Through this ministry, he translated and edited more than sixty theological and historical books

As an author he published the following volumes: The Theology of Revival in Jonathan Edwards – The Influence  of Jonathan Edwards’s Theology of Revival on Revival Movements in North America from 1735 to 1830, (Editura Universităţii Emanuel, Oradea, 2008); Studies in Historical Theology, (Editura Universităţii Emanuel, Oradea, 2008); „The History of the Baptists from Romania in European context” in Shepherds after my own heart – Essay in honour of Robert W. Oliver,  ed. Robert Strivens and S. Blair Waddell, (Evangelical Press, UK, 2016).

At present, he is the general director of Făclia Publishing House and the Director of Emanuel School of Practical Theology of Emanuel University in Oradea. Romania. Since 1996 he serves in the bible study department of the Emanuel Baptist Church in Oradea. He is married to Lidia and together have one son, Andrei, married with Ligia