Home/New Titles/The Book of Psalms From suffering to glory. Volume 2: Psalms 73-150. God's Manual of Spirituality
24 of 26 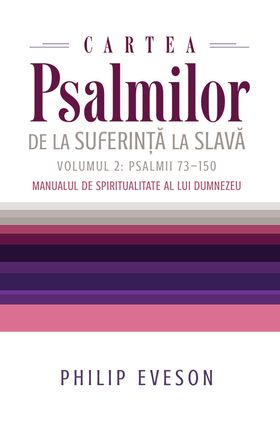 The Psalms continue to have an enormous influence on people s lives all round the world and down the centuries they have brought comfort and encouragement to countless millions of people.

Dag Hammarskjold, the second Secretary-General of the United Nations, died in a plane crash in 1961. His briefcase was recovered from the crash site and among the items it contained were a copy of the New Testament and the Book of Psalms.
In the New Testament the most quoted book of the Old Testament is the Psalms. Jesus clearly committed them to memory and found them speaking to him and for him concerning his ministry in life and death. The Apostles turned to the Psalms in their preaching as well as when praying for boldness in the face of strong persecution. Following the example set by our Lord, the writers of the New Testament saw them as pointers to the person and work of Christ.

In this commentary, Philip Eveson brings his skills as an Old Testament scholar, blended with a warm pastor s heart to produce a work that will serve the student, the preacher/teacher and the devotional reader equally well.

Philip Eveson is a former Principal of the London Theological Seminary (LTS) and was one of the four original faculty members. The subjects he has taught at LTS have included the Biblical Languages, Exegesis and Theology and preaching the Old Testament. He has pastored churches in South Wales and London and travelled worldwide lecturing and preaching. Though retired he is active in preaching and writing, and entertaining his four grandchildren. His commentaries on Genesis (2001) and Leviticus (2007) are published by EP in the Welwyn Commentary Series and he is the author of the EP Bitesize Biography of Matthew Henry.